Having been to quite a few European countries, food is always not cheap if you plan to eat in a restaurant. However, in Istanbul, I think it has the most affordable good food in a restaurant! One of the best way to know more about local culture when you've been to place, is of course through their food.

Occasionally it depends on your guts to try something in a foreign country such as fried cockcroaches as snacks in China or Thailand. Don't worry, food in Istanbul isn't anything like that. They are delish! The famous food you need to have in Istanbul is kebab which origins from Iran. You can probably find kebab like you'll get Chinese takeaways in almost everywhere in the world. Bear in mind that, kebabs in Istanbul has plenty of variety and many of them are so good.

Our first stop in Istanbul after checking-in to our hotel was to look for food as it was time for dinner. We walked around the streets near our hotel aimlessly when we stumble upon this place called, Şehzade Erzurum Cağ Kebabi (TripAdvisor review). The guy was showing us some travel book in Japanese with their store picture and words. Clearly they thought we were Japanese. We decided to give it a go! 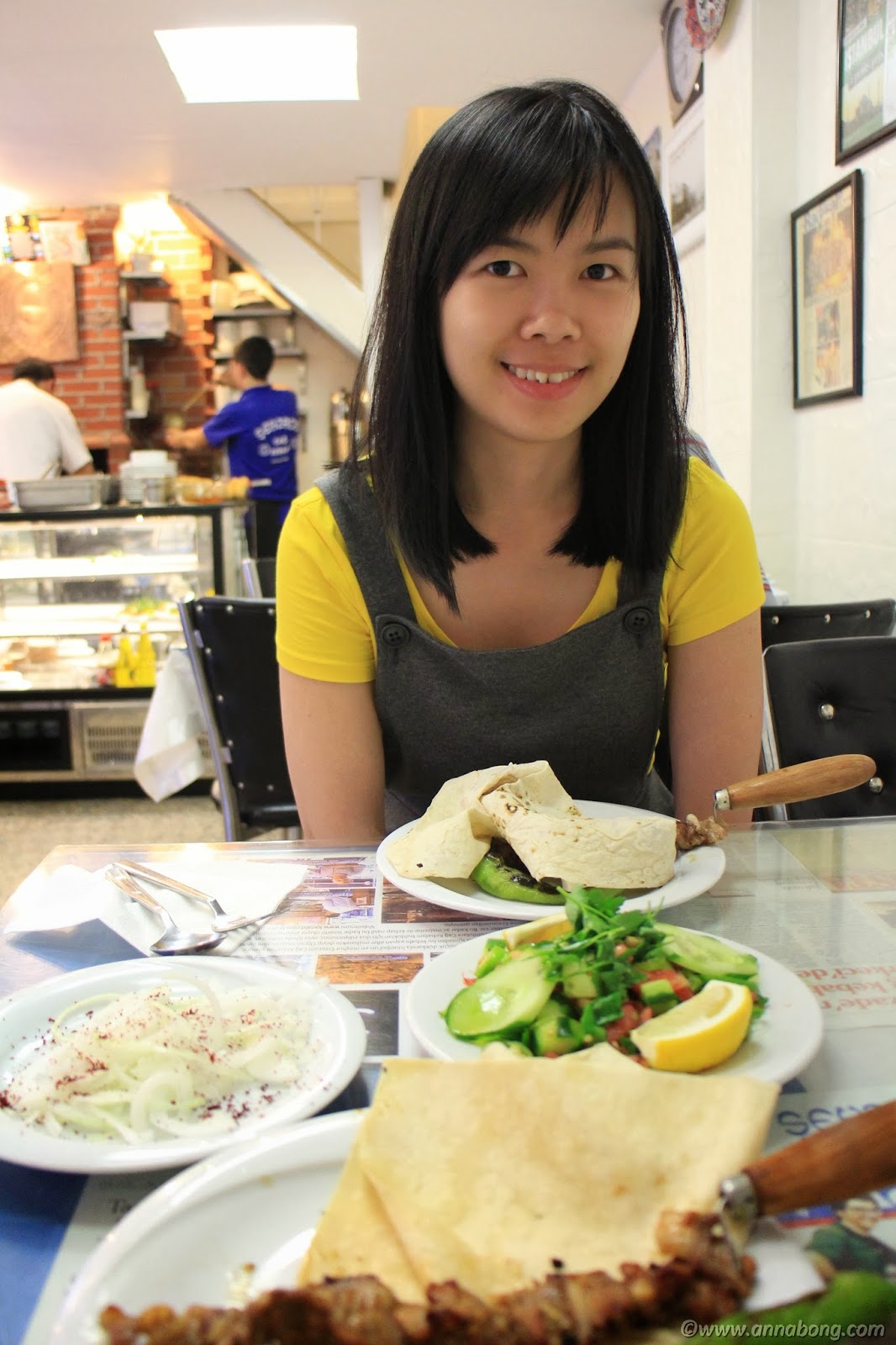 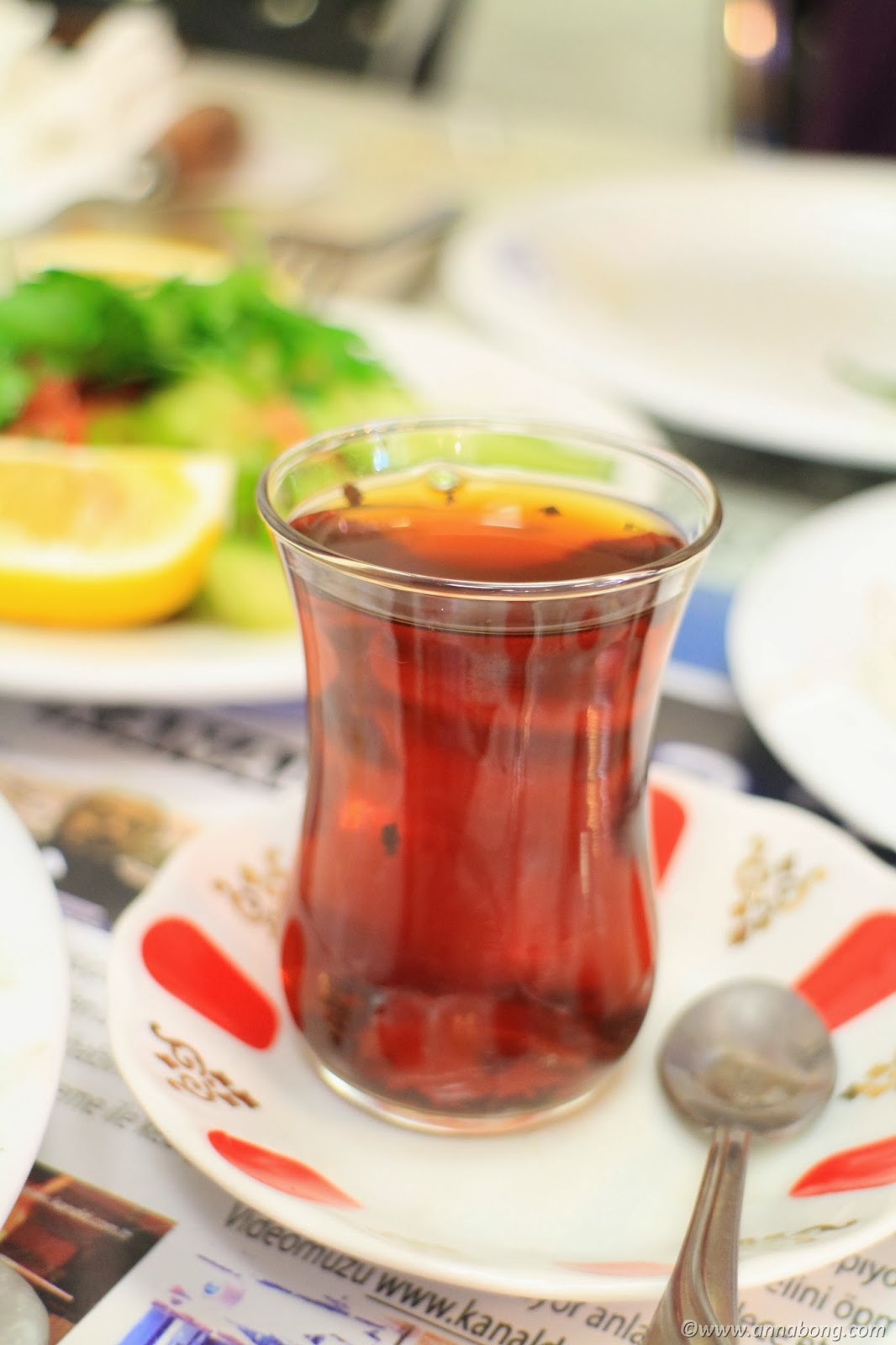 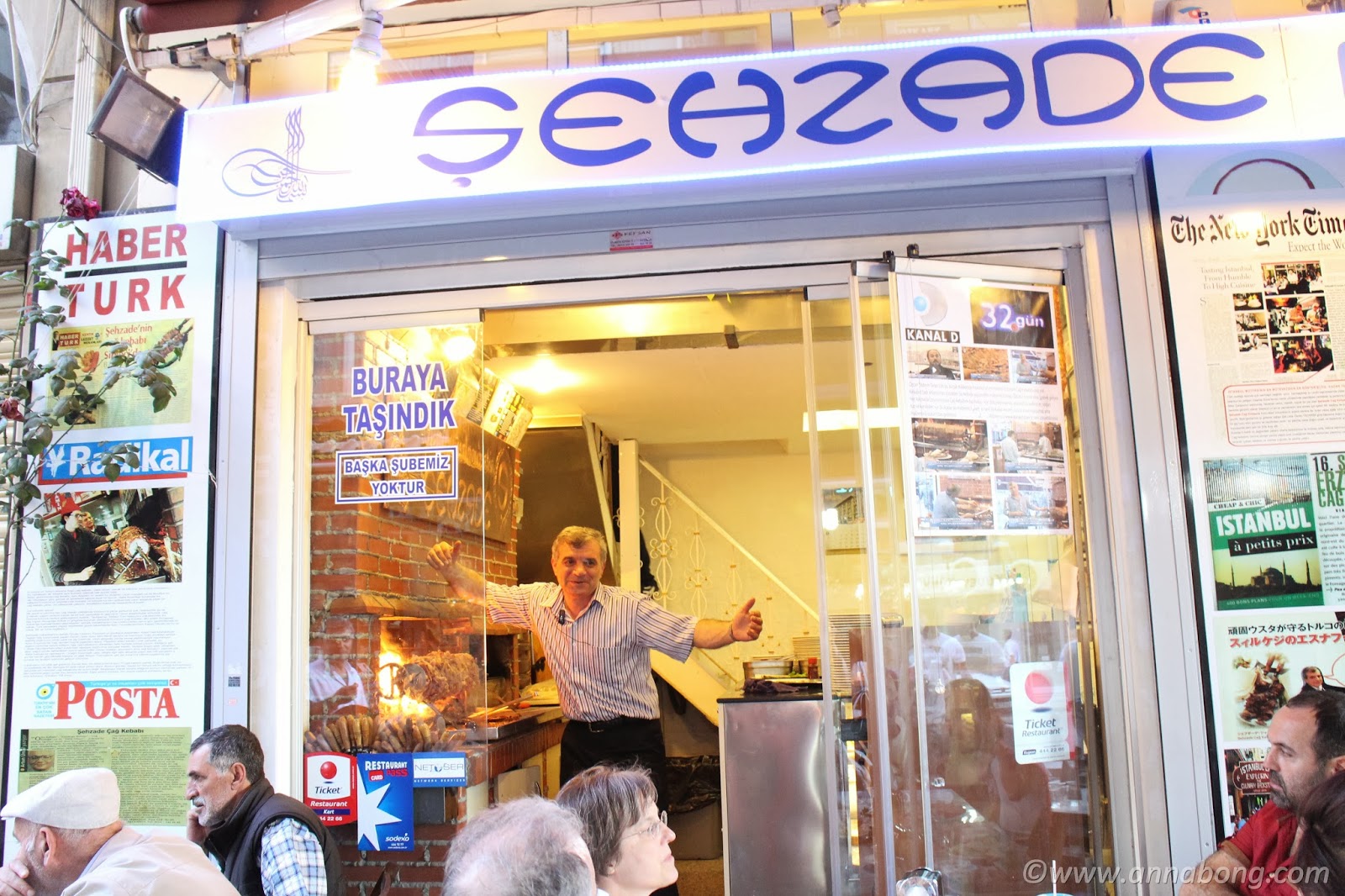 It turned out to be really good for their kebab. We have small stomach and we decided to share kebab and Turkish salad. It isn't any lavish restaurants and just look like a typical 'kopitiam' (non-airconditoned food places) in Malaysia. After a while, we understood that their specialty is their kebab grilled horizontally rather than the usual vertical grill. The meat was finely grilled, neither too hard nor too soft, and seasoned to our liking! We were not sure how to eat the kebab served with some kind of soft bread. By looking at the table next door is the way to find out! Turkish tea is not as what I expect, that it's a bit bitter but the tea cup is something I truly adore! If you're in Istanbul, do not forget this wee shop for nice Cag Kebab! It was good that we went back again! 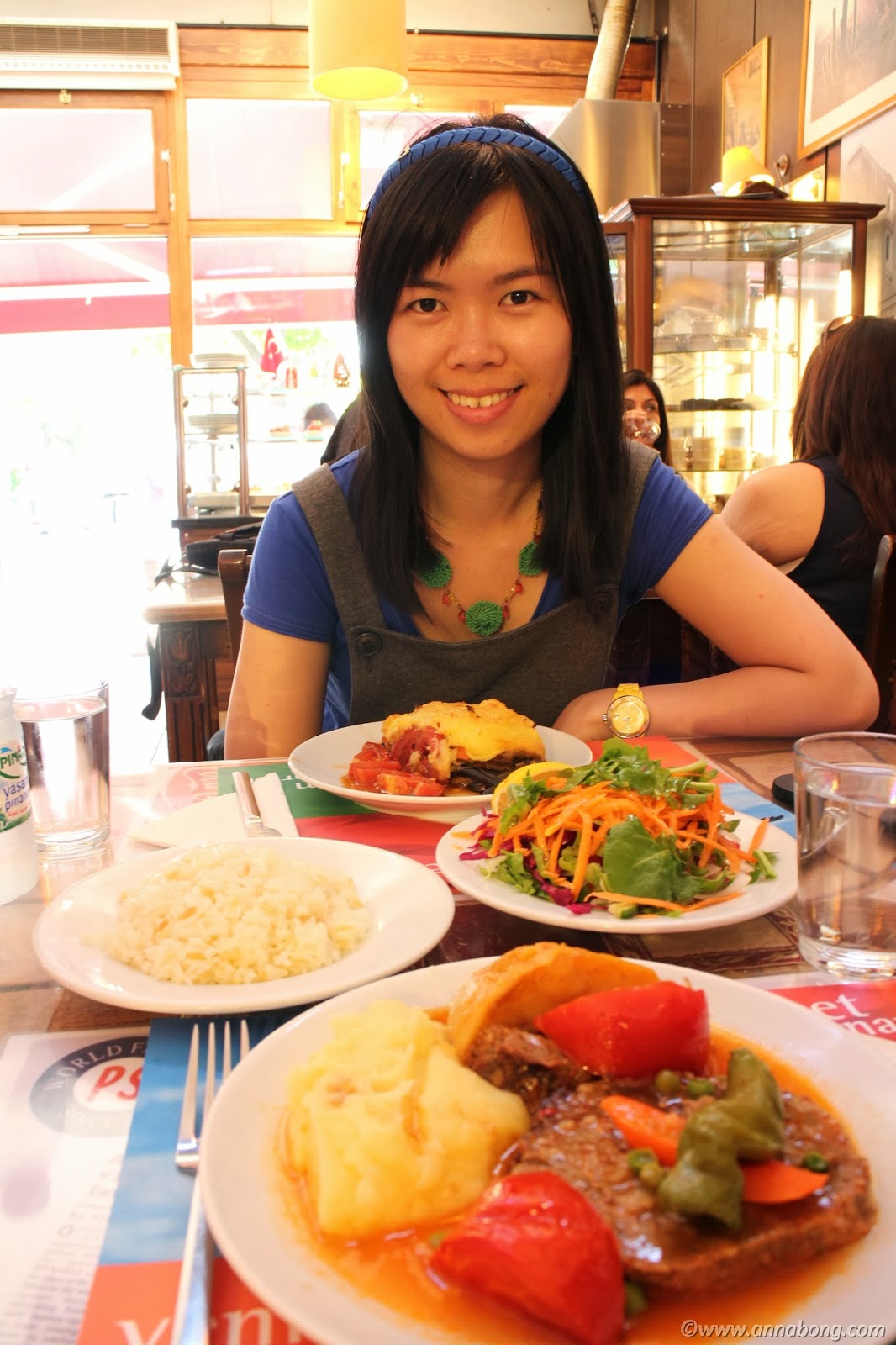 On another episode, we went to a restaurant called Pudding Shop (a.k.a. Lale Restaurant) near Sultan Ahmed Mosque (The Blue Mosque), which you should visit if you're there. They serves local food, affordable and yummy. Most of them are stewed dishes and are not too spicy. The outlook of it may not be too appealing but the food is good. It's more like a homemade food, and it was the only meal we had that's not kebab. This place has been long established which even has a Wikipedia (click here to see). When it's a place the locals would go, it can never be wrong! 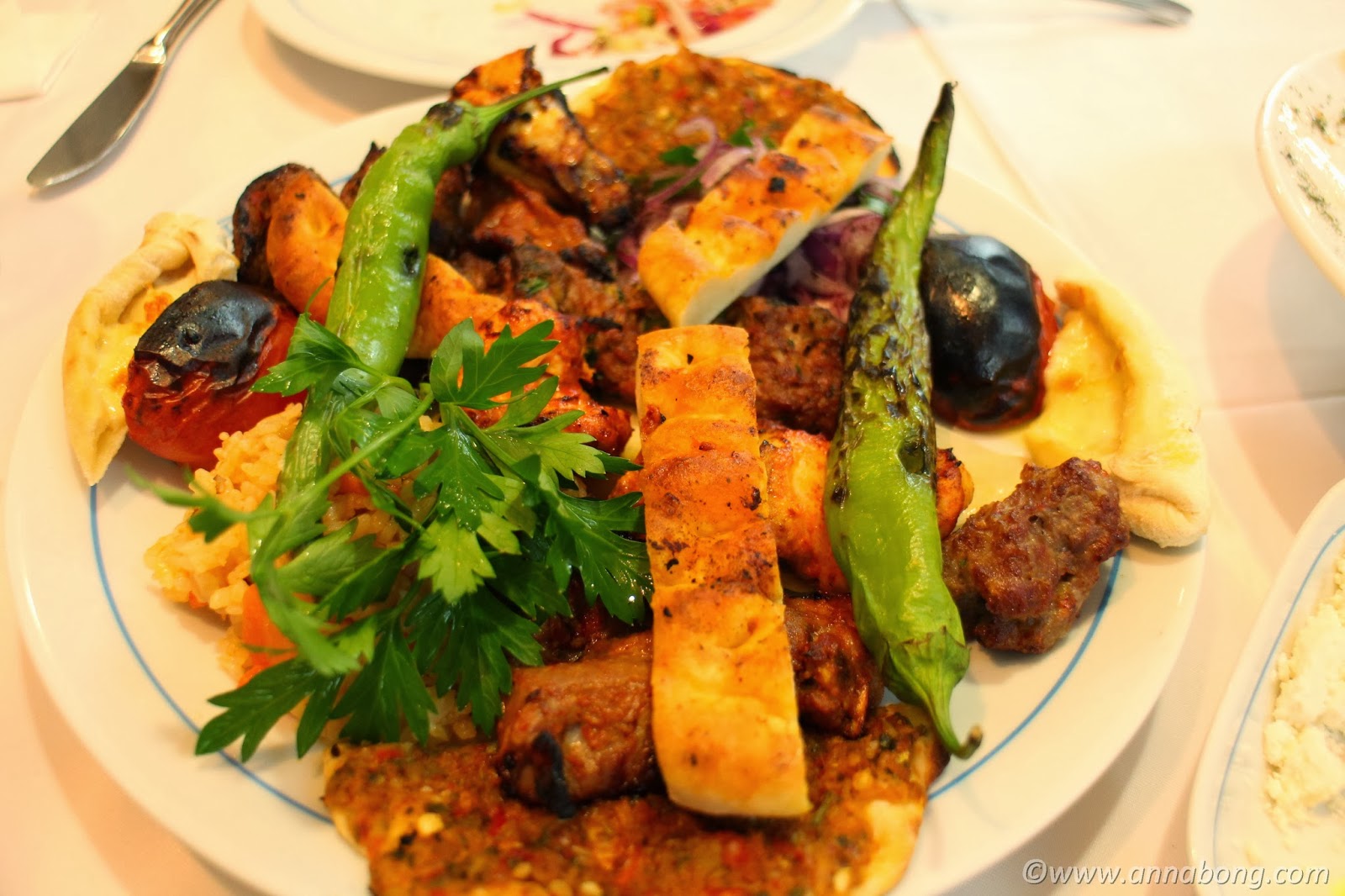 We went to one of the highest rated restaurant on Tripadvisor as recommended by other travellers. I must give credit to Stella who's always been efficient in researching and found where's the best place to see and eat. We had mixed kebab as seen in the picture above from Sultanahmet Buhara Kebab, which is the #2 ranking for restaurants in Tripadvisor (click here to read). I must say the Turkish hospitality is always great and we were being ourself, taking our time having some sort of long lunch there. We did not know what to order and we had mixed kebab, and it was delicious! Our best one yet! We were not being rushed through our lunch, which at the same time avoiding the noon heat outdoor. We were being offered Turkish tea on house, which was great! Though being a well-recommended, it's not overpriced. If you're walking from The Blue Mosque to Grand Bazaar, stop by here and you will not be disappointed. 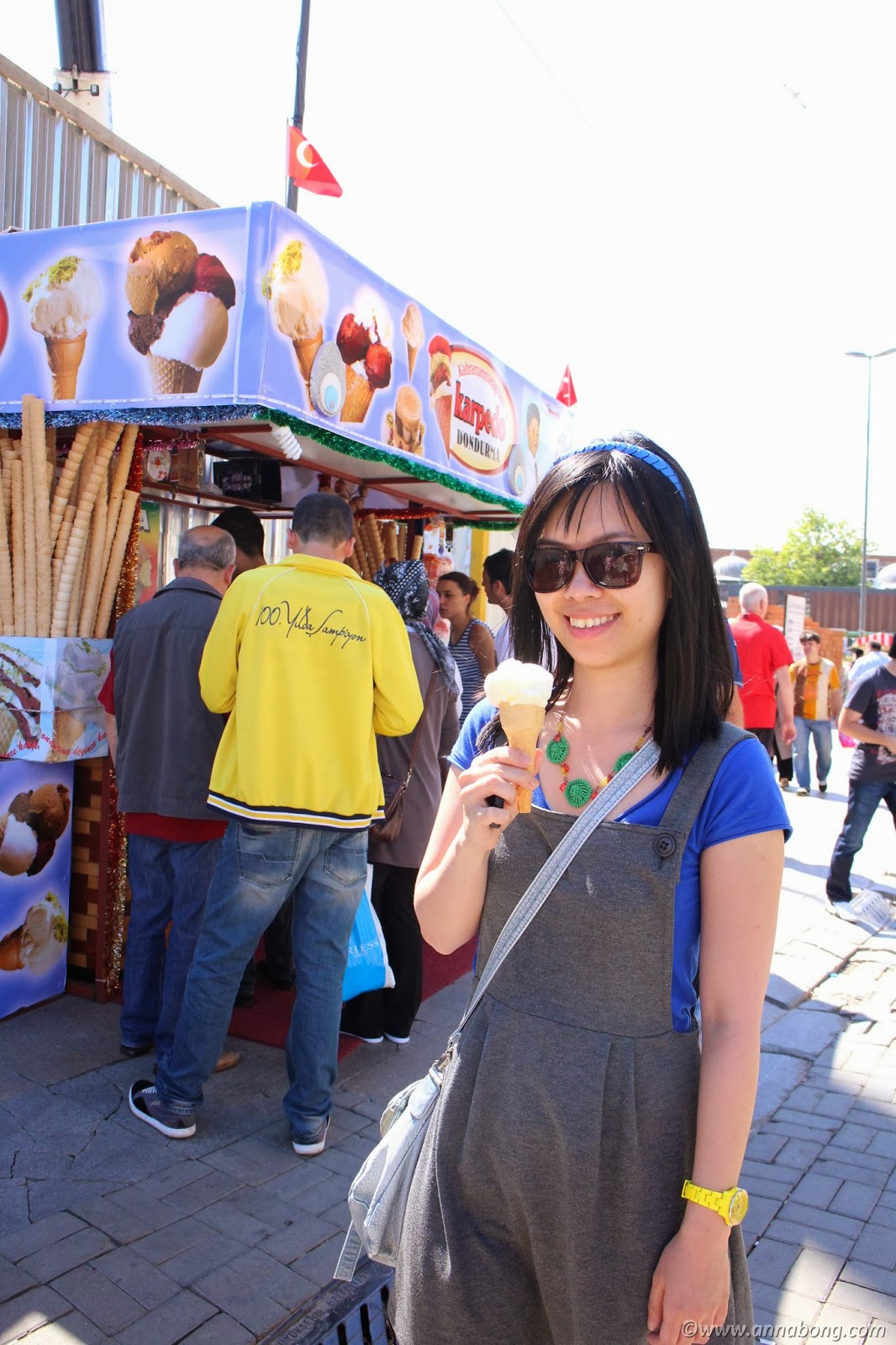 It was summer when we went and the weather being scorching hot. I'm not kidding! Though coming from a tropical country, I still cannot stand much heat! After visiting a mosque, I decided I need to have the infamous Turkish ice-cream. I remember walking pass Turkish ice-cream stall near Clarke Quay, Singapore, but I never had the urge to even try. Since I was in Istanbul, it is definitely a must! I had vanilla flavour. The texture of the ice-cream is not too soft, rich in flavour but has the sticky/stringy effect just like when you have mozzarella on your pizza (if you get what I mean)!

Hope you're mouth watering with the food the Turkish has to offer!!