Back in 2007, when I first came to Glasgow, the city was in bid for hosting Commonwealth Games in 2014. Fast forward, and here I am, back in Glasgow, where the city is welcoming people from Commonwealth countries, ready for the game!

As many people may not know, commonwealth of nations is an organisation of intergovernmental nations, made up of countries which were formerly British Empire. As a Malaysian, we used to be under the British colony until we are independent in 1957 as Malaysia (1963 for Sarawak). This Commonwealth Games, is deemed to be a much friendlier game compared to Olympics, but there were, of course many world class athletes involved, such as the Usain Bolt.

Just like the Olympic, people knows there's torch relay, for Commonwealth Games it's known as Queen's Baton Relay. I was lucky enough to be in Glasgow, and the Baton traveled with a stopover in my university. 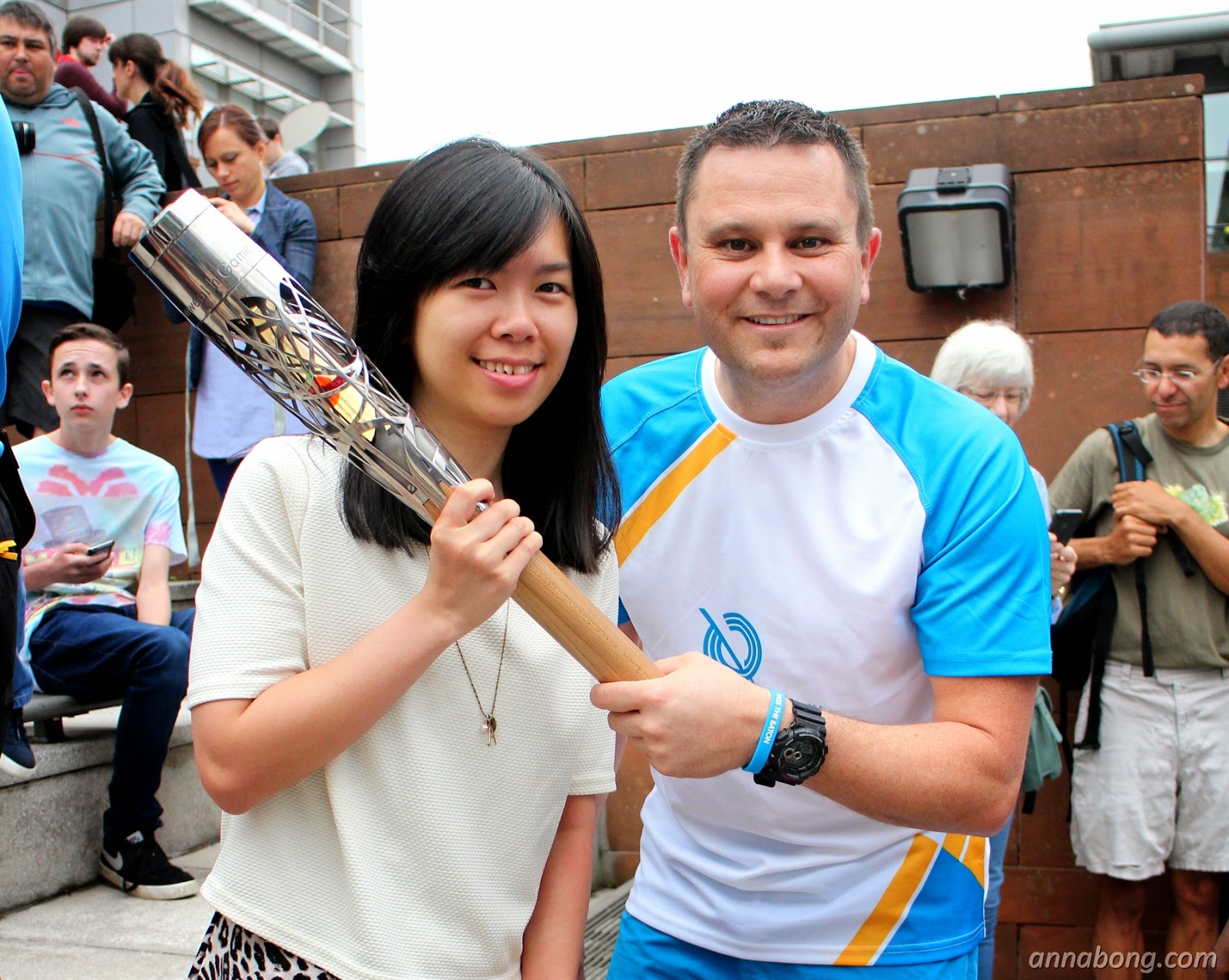 I got a chance to take picture with the Baton bearer, who's very down to earth, and I held the Baton for photos. If you notice, there's a white note tied with red ribbon, was written by HRH Queen Elizabeth II for all the Commonwealth Nation, revealed at the Opening Ceremony, at Celtic Park, Glasgow. 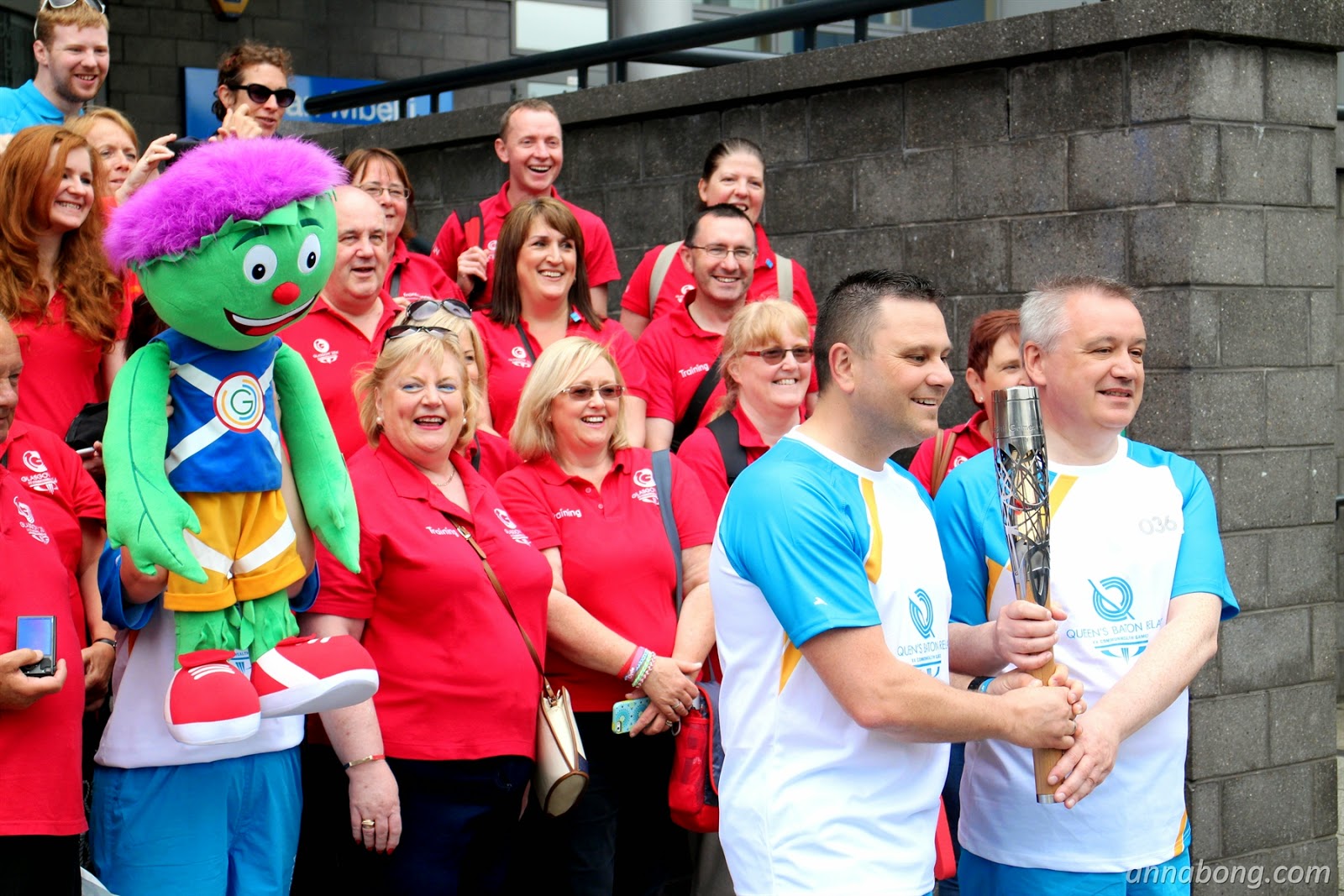 The Baton was handed over to the next bearer, touring Glasgow for 3 days before reaching the opening ceremony in Celtic Park. For your information, the green mascot, is Clyde, and he represents the national flower, thistle. 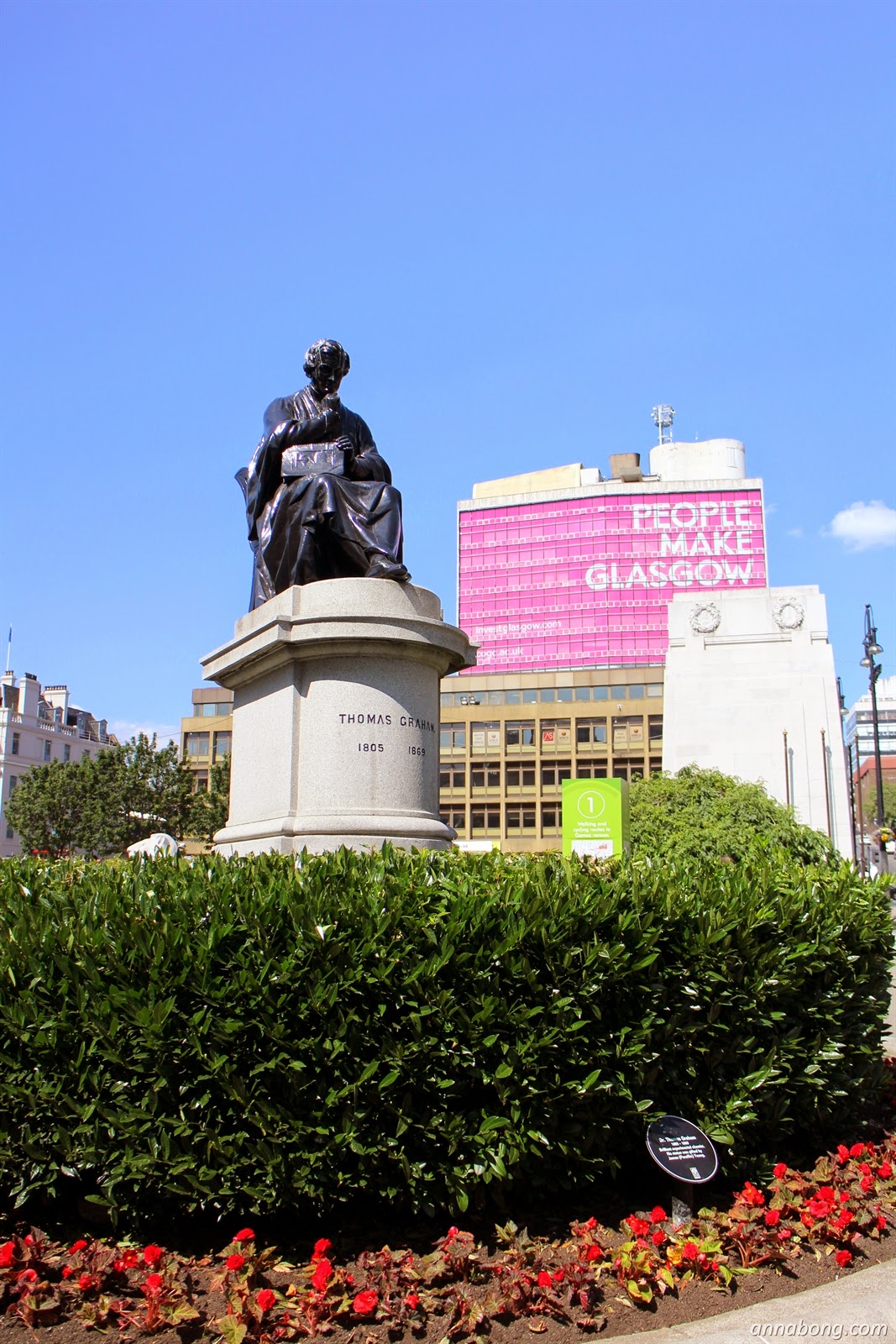 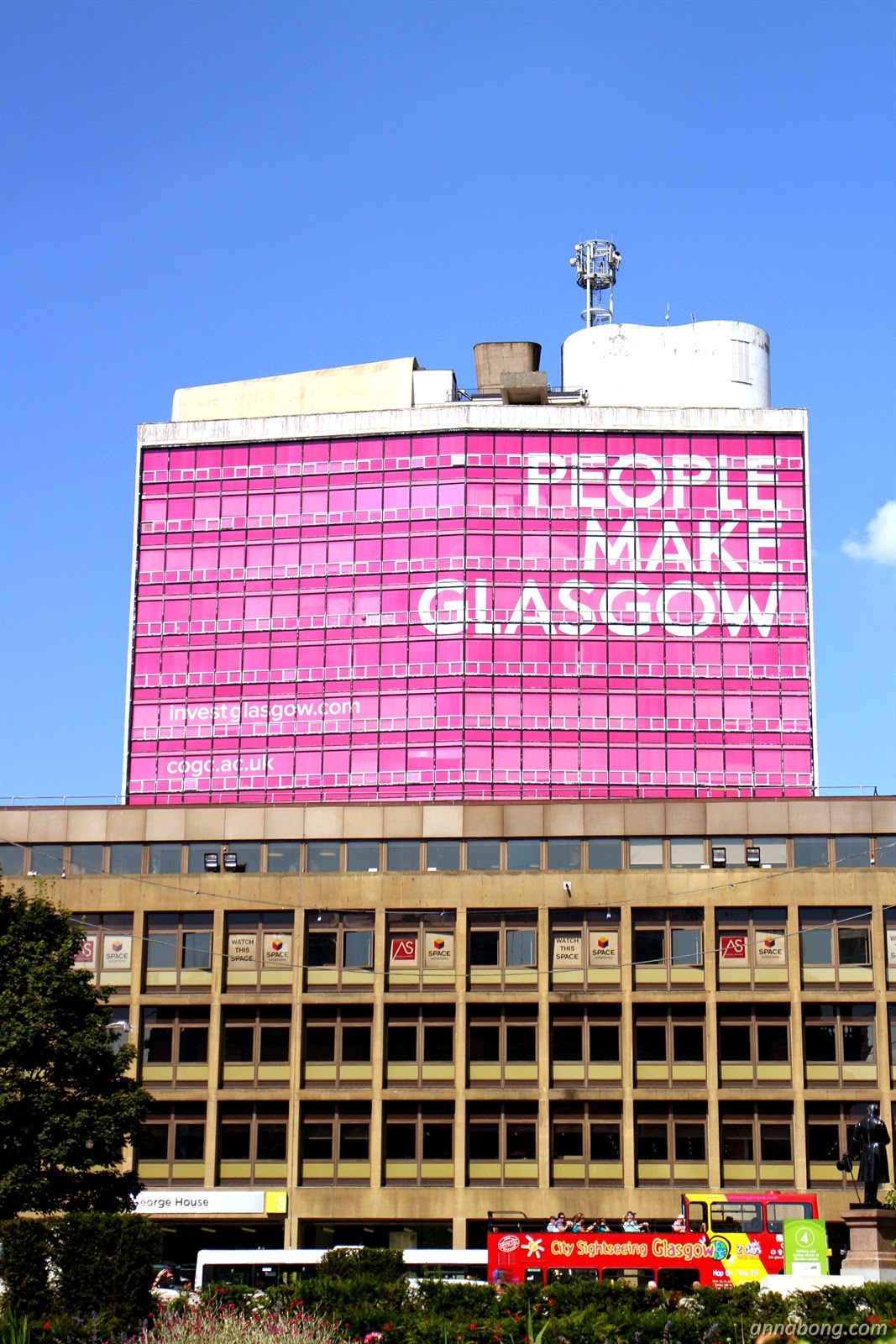 As soon as I submitted my dissertation, I know I need to walk around town, to join the buzzing city filled with people! And I love how Glasgow is prepared for it will all the friendliness. I was walking around and I could see smiles on people's face, so am 1!

'People Make Glasgow' is the slogan for Glasgow, and me, as someone who lives in Glasgow as a foreigner, I could feel how it truly means. Glaswegian (or Scottish) really makes the city exceptionally great! A place I called my second home. 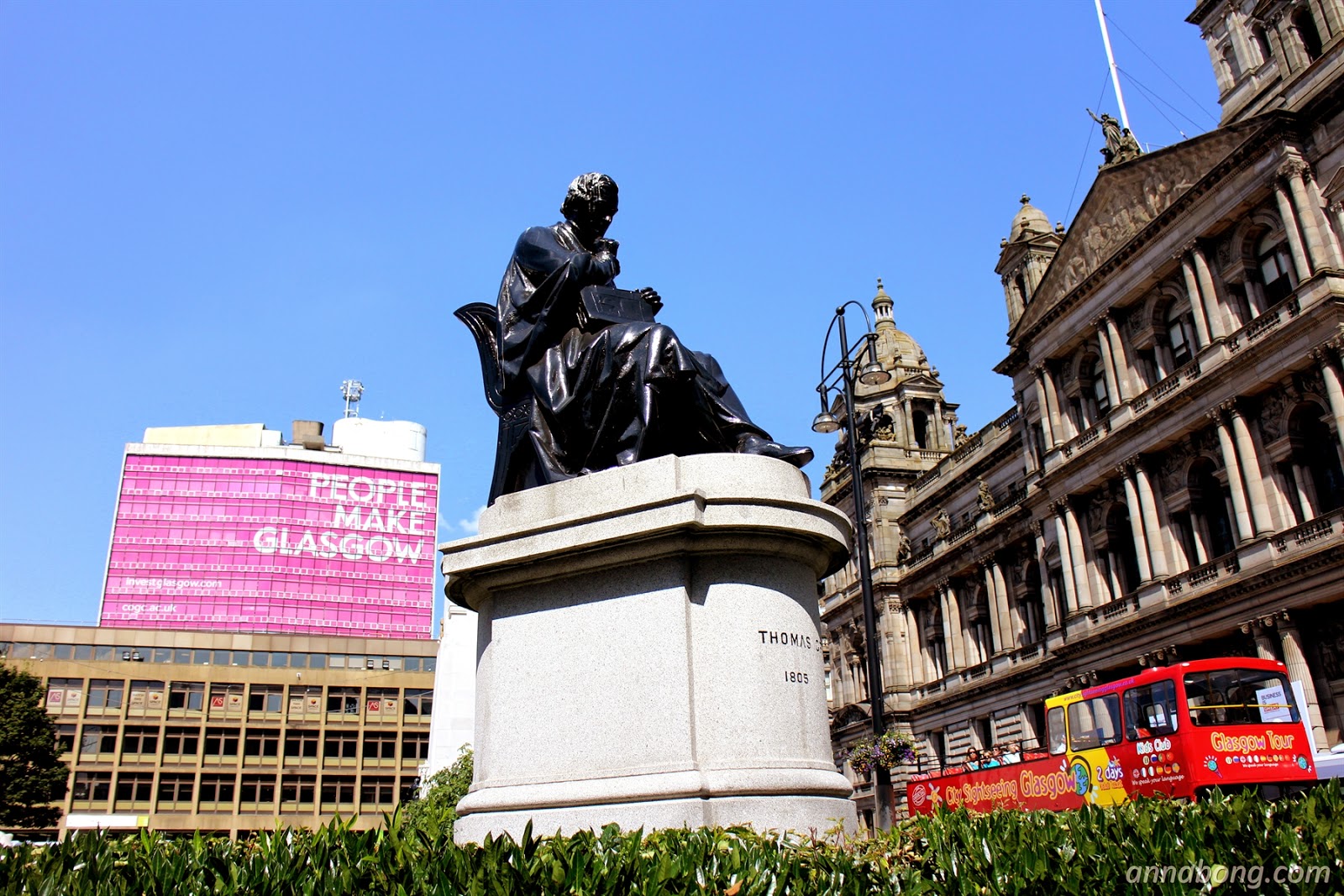 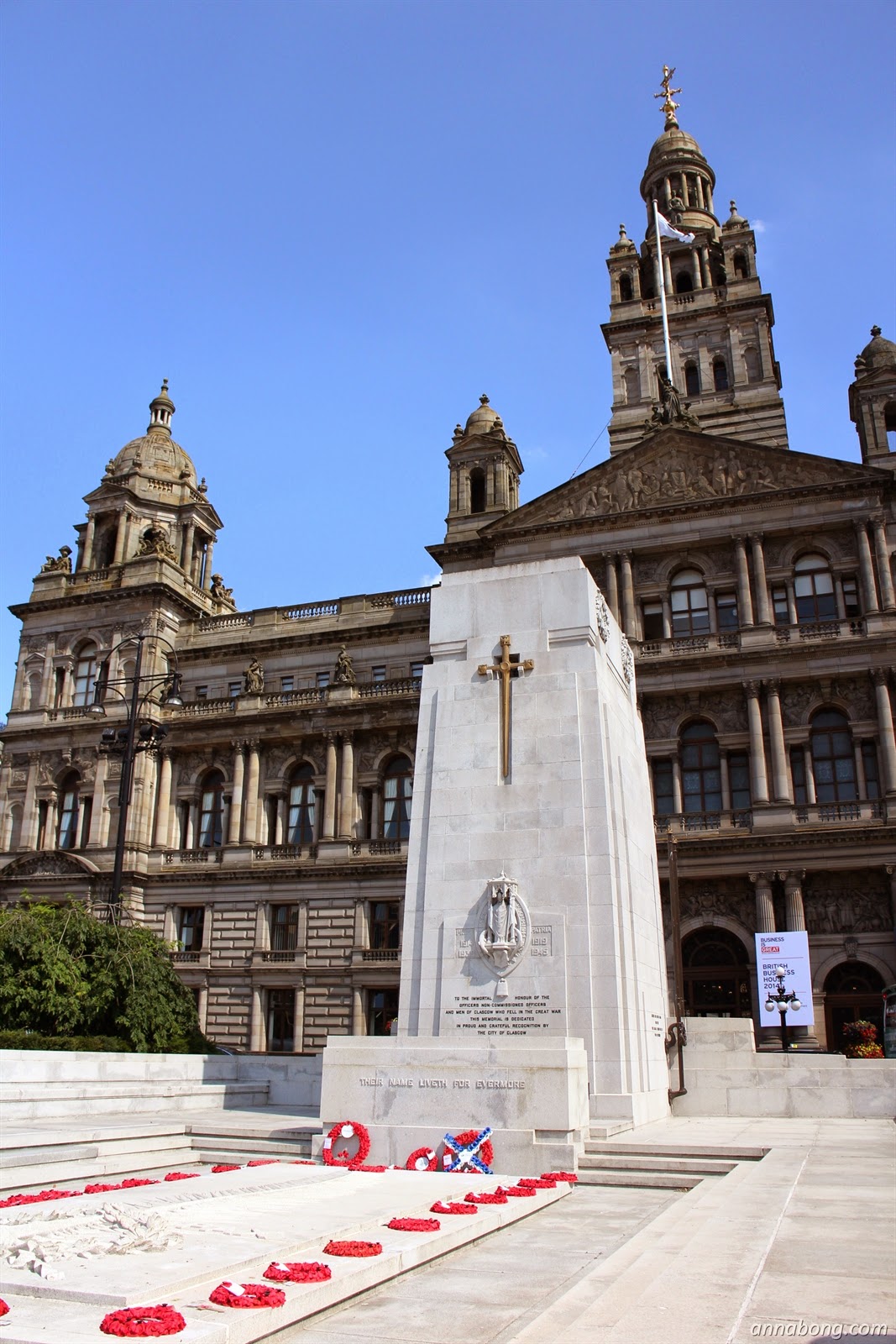 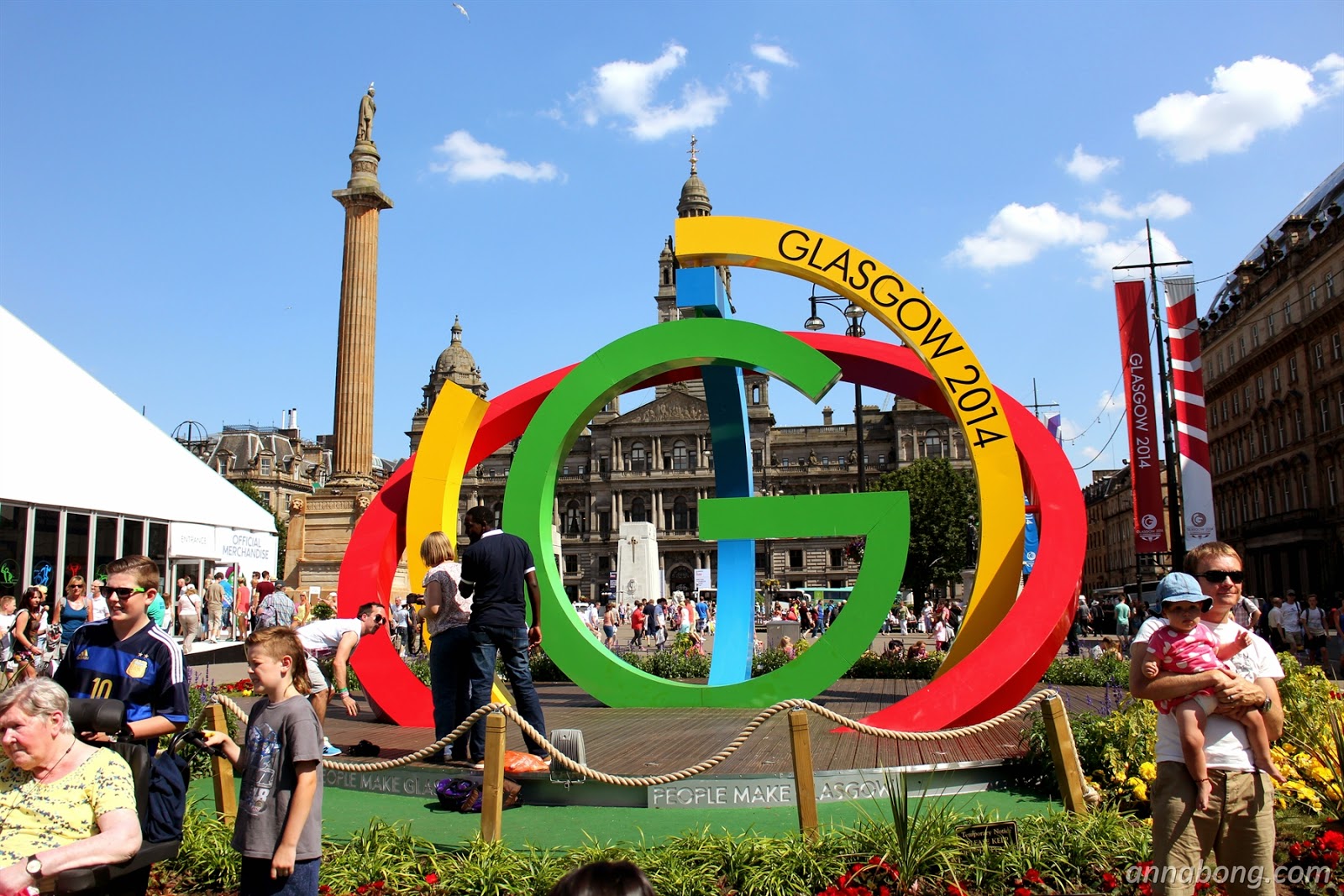 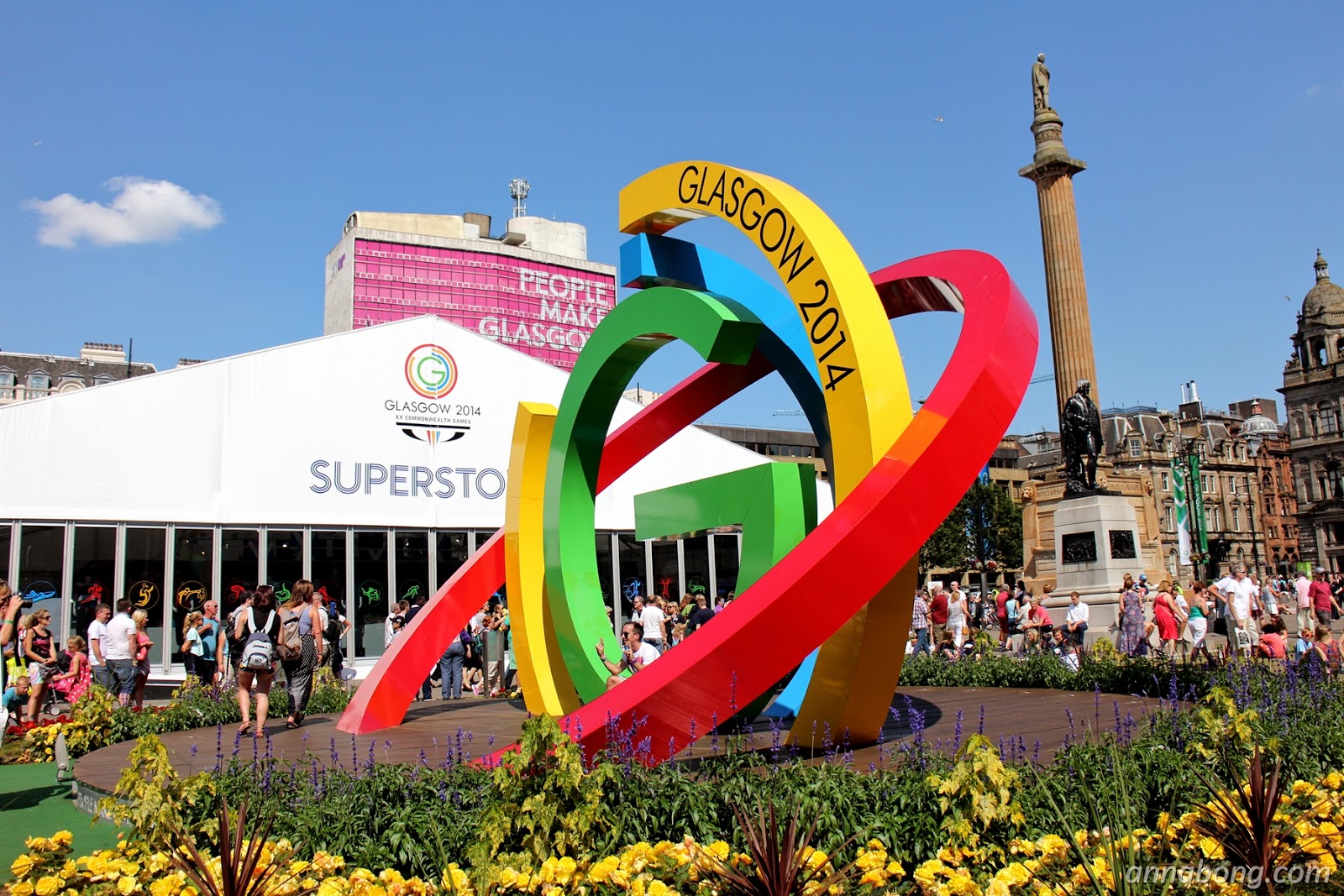 The Big G. Love the mixture of colours, and how bright it is standing on the most famous area in Glasgow, George Square. 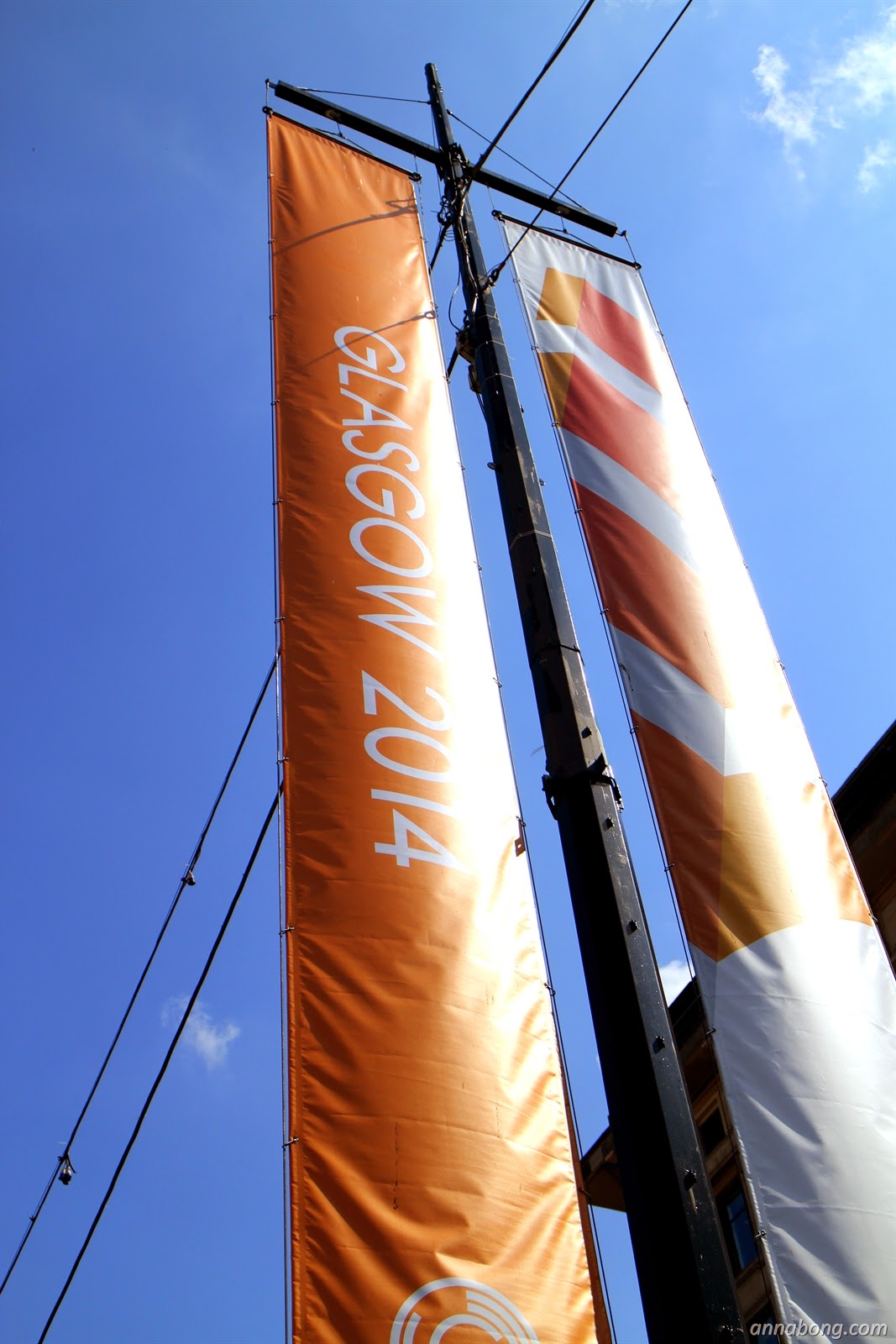 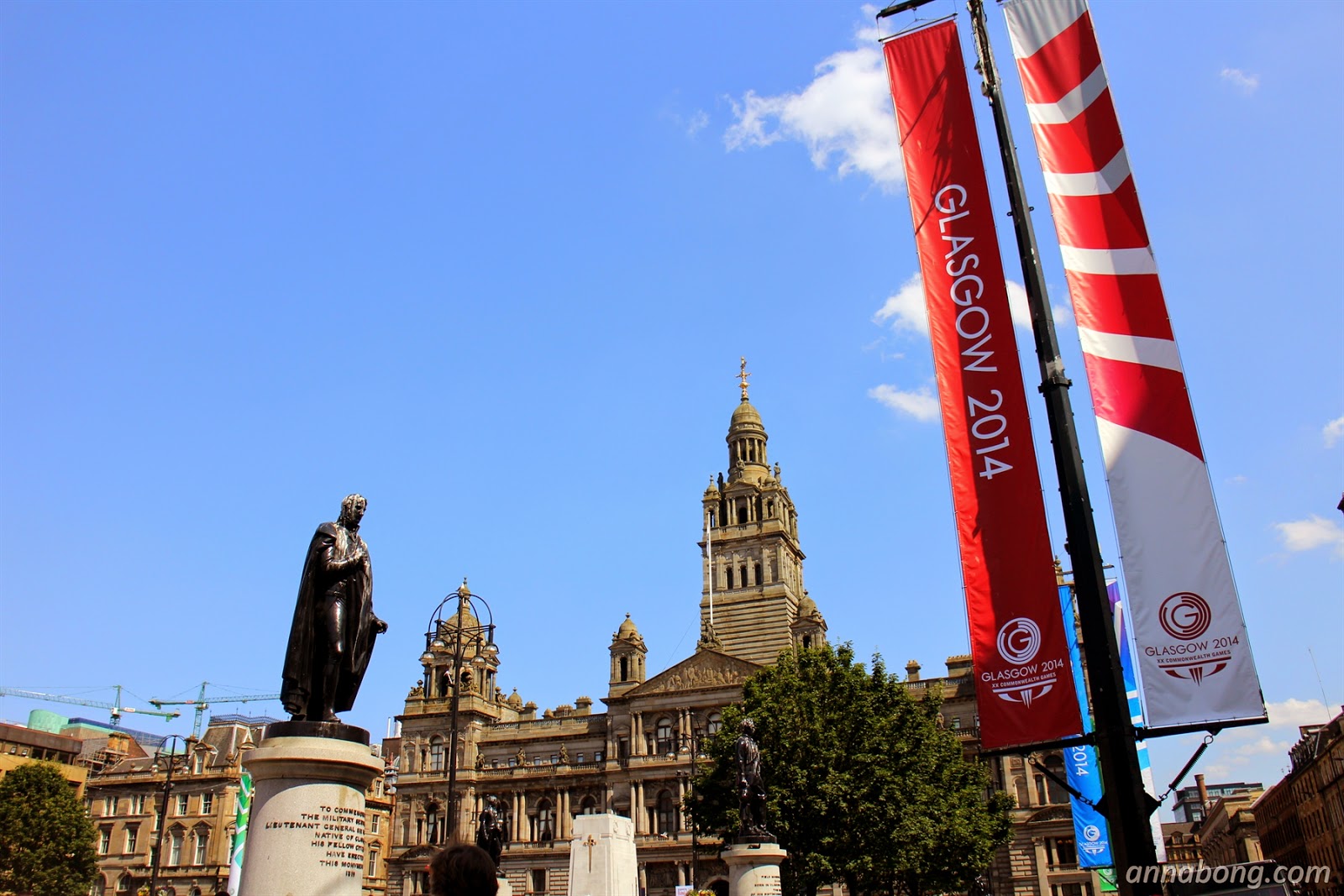 The city is now hanging with colourful buntings, brighten up the usual cloudy, wet, and chilly Glasgow. It was great that when I went out that day, sun was shining bright on the city. Love the vibrant city! 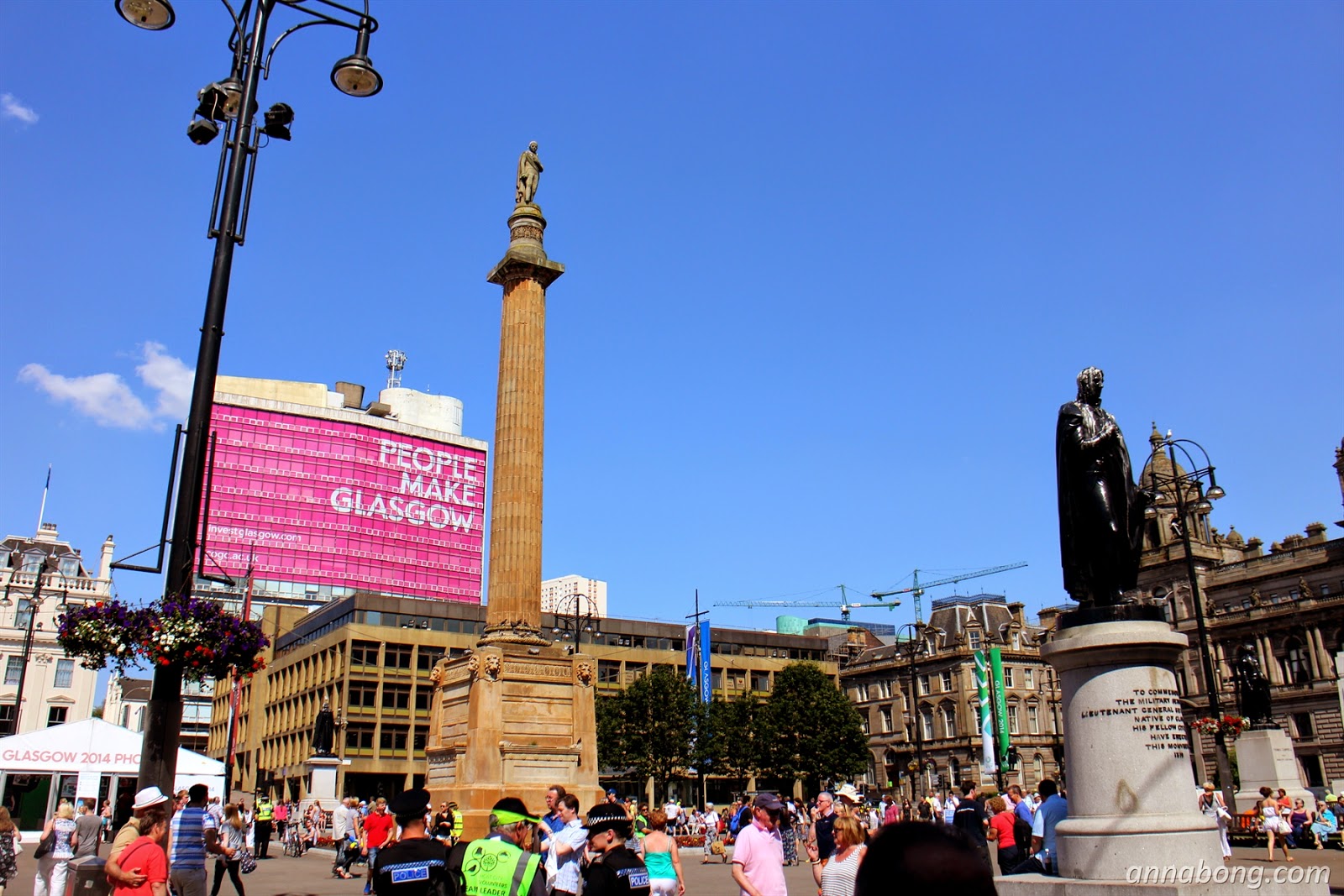 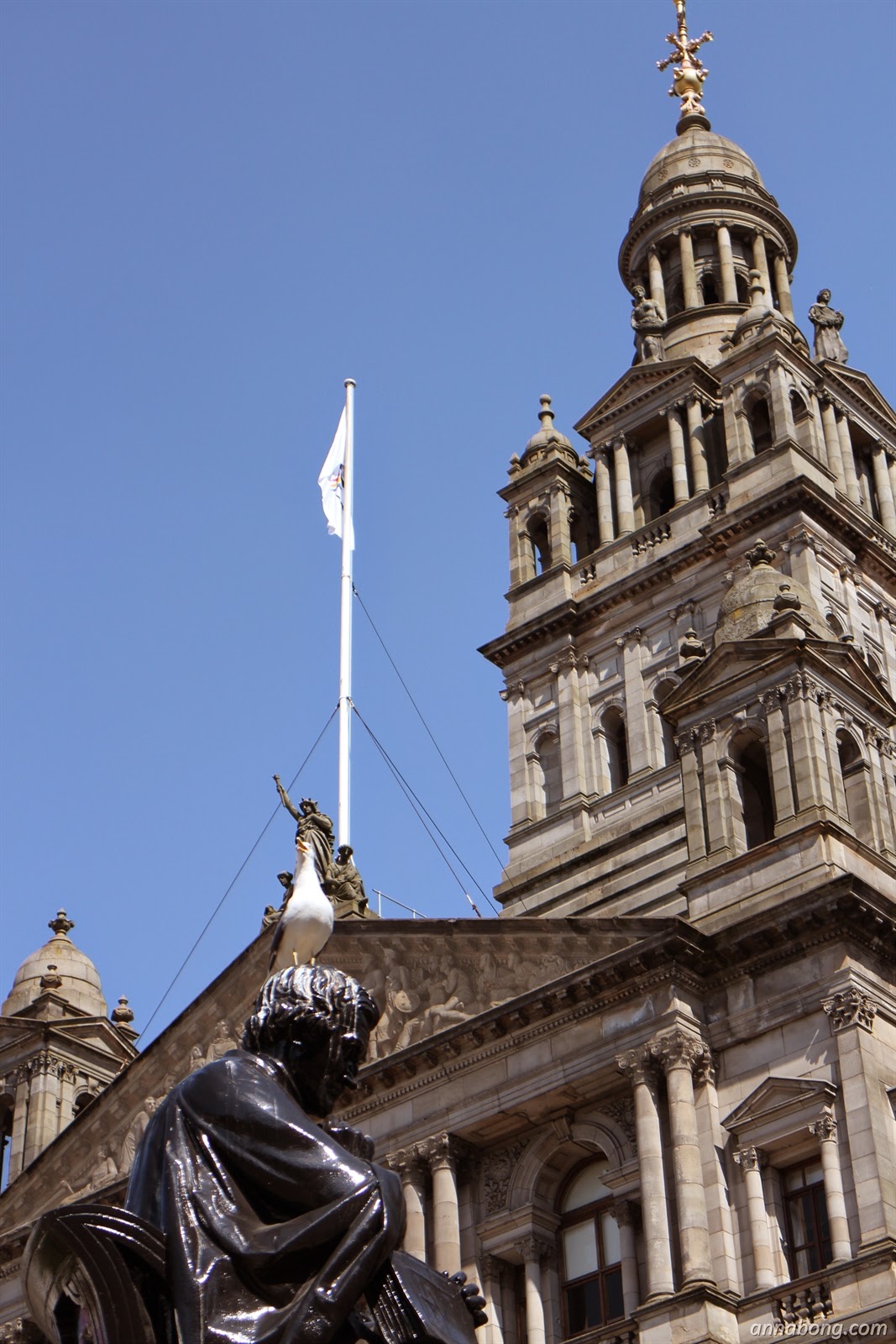 And, the seagull was caught sitting on the head of a status. Remember my words, the seagulls have pretty white feather, but they can be quite evil to snatch your sandwich away!

These are just part of what the city has prepared for the game, not just for the athletes, tourists, but also for whoever living in Scotland to enjoy the vibe! There are festivals and free events around the city, which is worth exploring. I'll dictate another another blogpost for it.

Although I didn't get any tickets for any of the sports event, but spiritually, I am supporting Team Malaysia! I am still longing to meet Malaysians or Malaysian athletes on the streets, giving them my support! I'd love to fly Malaysian flag with me, too! I'm feeling very patriotic here.

Just watched the Opening Ceremony in the comfort of my room, I teared when I saw #TeamMalaysia appeared with half-mass flag, mourning and remembering what happened to MH17. Malaysian athletes had a black band on their upper arm, including a few athletes wearing Malaysian Airlines' cabin crews' uniform. It was just emotional. On the other hand, I'm proud of Nicol David to be the flag bearer of the Commonwealth flag, alongside with other notable athletes such as Ian Thorpe.

So, friends, stay-tuned for much more exciting event happening in Glasgow during the Game!